Skip to content
Posted inPlaces
Posted by By admin August 3, 2011No Comments 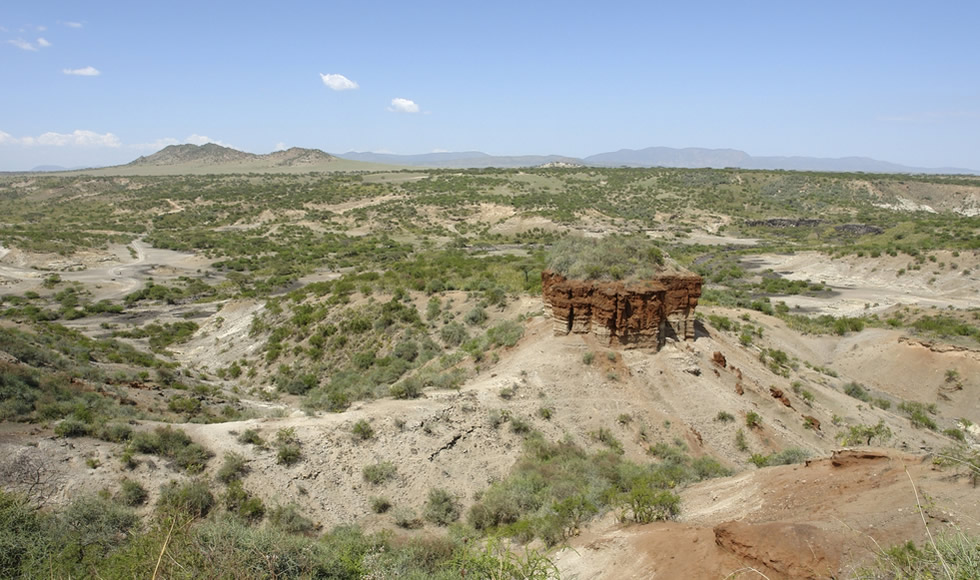 In 1911, a German entomologist named Wilhelm Kattwinkel happened upon a hitherto unknown (to him at least) valley cut deep into the undulating plains of the eastern Serengeti . Kattwinkel, who was touring East Africa on a privately funded butterfly hunting expedition, is said to have stumbled – or possibly even tripped and fallen headlong – into the ravine (almost killing himself in the fall by some accounts), only to be further stunned upon regaining his senses by the sight of hundreds of fossils and ancient stone tools littering the valley floor around him.

The ‘headlong fall into history’ story is almost certainly more fantasy than fact, but it is undoubtedly true that the small collection of fossils that Kattwinkel returned with to Germany caused enough of a stir to encourage a follow up expedition (led by Hans Reck in 1913) and set the stage for some of the most important archaeological discoveries ever made.

Olduvai Gorge, as the now famous site has become known, has (like so many landmarks to have been pointed at earnestly by early European explorers) suffered from linguistic misunderstanding from the start. Kattwinkel, while attempting to record the name of this fossil-rich ravine, enlisted the help of the local Maasai tribesmen who informed him that the thing he was gesticulating at so keenly was in fact ‘Oldupai’ – the Maasai word for Wild Sisal – a succulent plant which grows abundantly in and around the gorge. Kattwinkel dutifully misheard, and proceeded to record the name in the form we know it today. Despite an official renaming by the Tanzanian authorities in 2005 (to replace ‘Olduvai Gorge’ with ‘Oldupai Gorge’), the earlier name seems, at least in the English speaking world outside of Tanzania, to have stuck for the moment.

The gorge itself consists of 2 branching ravines with a combined length of roughly 50 kilometres and a depth ranging between 50 and 90 metres. There are 7 distinct sedimentary layers and it is precisely these clearly defined and (most importantly) chronologically dateable layers, which make the Olduvai Gorge so valuable to archaeologists. The small river that has created the ravines has now partially exposed the sediments and visitors to the site today can look down into the gorge from one of the outdoor lecture areas of the Olduvai Gorge Museum, and have the layers pointed out by the friendly, knowledgeable staff. With the oldest sediments dating back just over 2 million years, it is impossible to ignore the overwhelming sense of history – in fact of pre-history – which permeates the site, and it is deeply awe-inspiring to know that tool-making, upright, human-like creatures – our earliest ancestors – were inhabiting this very spot 2 or more millennia before.

Since the first anatomically modern hominin skeleton was pulled out of the gorge by Hans Reck and his team in 1913, over 60 further full or partial skeletons have been unearthed at the site, most either directly by or under the supervision of Mary and Louis Leakey and their second son Richard. It was Mary Leakey’s discovery of a 1.75 million year old skull fragment in July 1959 which ignited the world of archaeology and pushed back the then accepted date of our earliest African ancestors by over a million years.

The Olduvai Gorge lies within the Ngorongoro Conservation Area, about 200 kilometers west of Arusha , and as such can only be reached by paying visitors to the wider NCA. This can run up to hundreds of dollars a day once entrance, vehicle and mandatory guide fees are paid. Once into the NCA, the gorge is situated about 50 kilometers from the southern rim of the caldera, almost due north west. There are a number of public campsites and lodges dotted around the caldera as well as a campsite and lodge at Olduvai itself.

Olduvai has often been called the ‘cradle of mankind’ (not to be confused with South Africa’s ‘cradle of humankind ’ around Sterkfontein) and in recognition of its unquestioned significance to our understanding of prehistory was declared a UNESCO World Heritage Site in 1979.

Gustave – The Story of the Legendary Maneater